successful role as a Stylist and a loyal clientele in Toni&Guy GangNam, 2003 I moved to London where I continued my career and continued to grow my cutting and colouring skills in Toni&Guy Wimbledon.

I am also a specialised in the Permanent straightening system for which I was originally trained in Seoul.

I see Beauty in all of us and want to make my clients look at their best while still  being who they want to be. 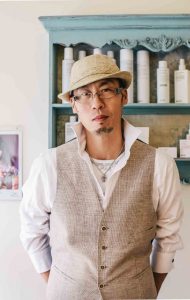 Hi, my hairdressing Journey started in Seoul back in 1992 after working 2 years at hair salon I had a 2 years break to attend compulsory military service for a further 2 years.

In 1996 I decided to broaden my experience and knowledge so I moved to Japan where I stayed for 4 years, I became specialised in Hair-up and kimono wearing beside my daily fashion hairdressing.

In April 2000 I opted for another adventure and decided to come to London, where I worked with RUSH group as art director and manager at Putney branch.      I also owned franchise salon RUSH in Fulham.

After all  my final destination was Four mirrors.  Looking forward to seeing you!